The rest of Addo to Karoo trip

Laughing and wailing wake me from my dreams and plunge me straight into memories of nights camping in the Kalahari. That familiar feeling sends shivers up my spine as I wonder how far away the hyenas are from the tent. A bead of sweat forms on my forehead and I pull the duvet up around my shoulders. 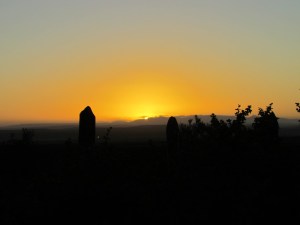 Slowly I wake up properly and remember where I am as the moonlight outside shines through the little canvas window, lighting up my tent, safely behind the fences in the Spekboom Tented Camp in Addo Elephant National Park. I turn onto my back to make sure that both my ears can soak up the beautiful wild sounds as the hyenas, successful in a kill, celebrate their hard work with whoops, wails and laughter that reverberate in the night air.

We’re up and about early on a mission to catch the dawn sky as it colours the landscape. As we creep down to the waterhole for a quick peek before heading out into in to the park, we are not disappointed. Two hyenas lie bathing in the golden water cleaning one another. They yawn as the sun’s rays massage their dirty hides in an effort to speed up their sleepiness. Our jam-packed itinerary on this Regional Adventure meant we couldn’t spend too long watching the hyenas, so when they padded off to their dens we too headed out to find some more elephants. 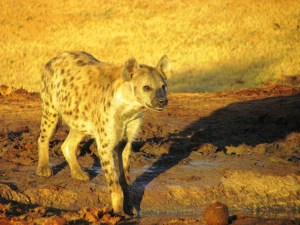 Hyenas quenching their thirst in the early morning rays

Hapoor Dam was still teeming with elephants of all sizes. Two, three and sometimes four generations all in a row, every one of them stretching for drink from the glossy water. The lack of rain showed it’s effect as trunks stretched to their limits and little ones had to kneel right on the edge for the smallest sip of muddy water. 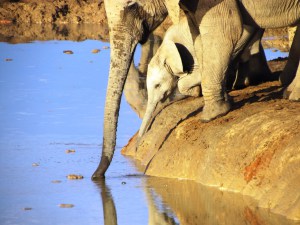 Baby Elephant reaching for the water

With the mercury climbing we met up with the rest of the group at Addo Main Rest Camp and said our goodbyes to Addo as we climbed up into the Karoo via the N10 to Cradock.

My last memories of Mountain Zebra National Park were of sweltering hikes and dry, dusty plains. However, what greeted us on arrival, was green upon green. Graceful slopes littered with imposing dolerite boulders and three iconic Karoo koppies standing sentinel in the distance brought about an instant feeling of peace and tranquility.

Our activity for the afternoon was to go in search of some of the rock paintings that had been found in the park, which boasts over 30 prehistoric sites, identified in an archaeological survey in the 1970s. As we stood there, marvelling at view down the ridges and kloofs, we took turns telling our versions of how we imagined the San would have ended up on this little ridge and what would have led them to paint these images.

A threatening looking slate sky chased us all the way to our the secluded Umthombo Mountain Cottage and as we were settling in we watched the ground steam as giant-sized rain drops splashed into dust and rock. Rainbows appeared and the landscape glowed in the evening light, the sunset colouring the clouds from behind turning everything a dusty pink. With no electricity (the cottages are run entirely on solar power and gas), signal or fences we settled in for the night listening to the rain as it drummed its own rhythm on the tin roof.

Staying in the Umthombo Mountain Cottage in Mountain Zebra National Park time stands still and the world seems as though it has been put on hold. The previous night’s rain hangs in the thorn trees like diamonds on display and shimmers down the tall dolerite stacks that surround this remote corner of the park. Today’s alarm clock, the gushing of a nearby waterfall, is a little kinder on the senses and I am easily coaxed outside to photograph the morning light magnified in the rain drops.

Our morning ablutions are brisk, mainly due to the friendly “beware of lions” warning sign and I decided to shower with the door wide open to prevent any surprises. I certainly hope I didn’t scare any game away with my brief stint of exhibitionism.

Having arrived fairly late at the Park we packed up and headed out to explore the Kranskop Loop, taking us deeper into this magnificent section of the park so we could hang on to its magic for a couple more hours. We wound our way up into the remaining rain clouds and watched the beauty of the park unfold below us. The higher we climbed the greater our reluctance to return to civilisation but the promise of cheetah tracking lured us away from our mountains and down to Main Camp to meet up with the group. The well marked and graded roads make driving around a pleasure and an abundance of game, birds and views certainly add to the experience.

Feeling like intrepid explorers we bumped and jostled our way along back roads and into an adjacent valley following the muffled beeps of the ranger’s radio tracking equipment. Finding her was tricky but trekking on foot in any of our National Parks, is a treat never to be passed up on, especially when you can come within spitting distance of a magnificent cheetah in her natural environment. Once again time stood still as we quietly watched her panting in her shady spot, the sweltering heat of our hike and the maze of golden orb spider webs long forgotten. 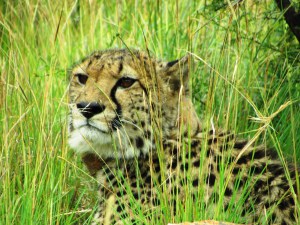 A cheetah tracking experience is worthwhile.

It has been a long time since I felt this reluctant to leave somewhere but the grace and beauty of Mountain Zebra National Park captured my heart and I am certain to return as soon as possible, as often as possible. With that, onward we went as a sun-downer dinner at the Valley of Desolation held the promise of photographic opportunities galore.

The beauty of Camdeboo National Park, near Graaff-Reinet, lies in its simplicity. Travelling from Mountain Zebra National Park we arrived in Graaff-Reinet and headed straight up to the Valley of Desolation to catch the promise of a magnificent sunset, and a cocktail supper spread from Coldstream Restaurant that has us salivating all the way to the top. Our light was stolen by some low hanging clouds, but secretly all we could concentrate on were the platters waiting for us half way down.

The Valley of Desolation gives rise to feelings of determination and purpose, just as though you are at the top of the world. The desolate but characteristic Karoo landscape lies exposed before you, daring you to explore or challenge it.

Arriving at the tented camp in Camdeboo National Park, the air is filled with quiet and the magnificence of the mountains is replaced by tranquility. The Lakeside Tented Camp consists of canvas and wood tents with just the right amount of comfort and well-thought-out amenities to make it more than just a place to sleep. The indoor/outdoor communal rain showers were consolation for our dusty cheetah-tracking bodies. The coolness of a threatening rain shower tucked us into bed and the gentle buffeting of the canvas tent lulled me to sleep.

So much so, that when we leave the next morning for our much anticipated breakfast at the impressive Coldstream Restaurant in Graaff-Reinet, it felt as though we stayed for a week. With satisfied tummies we departed from Graaff-Reinet heading out on the Aberdeen road, bracing ourselves for what promised to be the longest straightest road yet to Beaufort West. Most of us spend our lives chasing stimulation and excitement, always wanting the best views and the biggest mountains, but as we drive through this edge of the Great Karoo I find absolute beauty in the nothingness that stretches either side of the road.

Endless views of flat (and I mean flat), dry landscape coupled with a rising thermometer cleared my head of unnecessary clutter and presented my imagination with a barren canvas on which to create.  If you think about it enough, open space like this is a luxury and when we reached the gates of the Karoo National Park, I felt as though I’d won the lottery for open space. Lots of sky, lots of heat: we are in Africa. 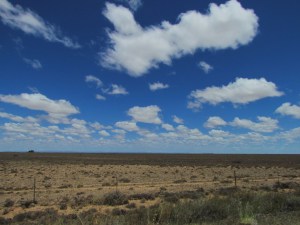