Looking back at Finding Freedom

I wrote this for a contribution to a book on Transformative Tourism and thought that I would love to share it with all of you. Sometimes I go back and read it just to make sure I never forget what led me to where I am. In fact, I’m hoping it inspires someone…and let me know if it does. 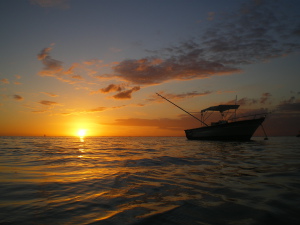 “You did what?”
I resigned.
“You are running away.”
Exactly.
I found myself trapped. Trapped by commitments, traffic, fluorescent lights, walls, walls and more walls. I did not want to live here, but I did not know how to escape. As I slowly crept towards boiling point, the decision was made for me. One by one all the things I thought were important, fell away and I was left alone and desperate. So I followed my heart and looked way back into my childhood to discover what was important to me.
As a child growing up in Botswana and Zimbabwe, we spent all our holidays bouncing along in the back of a land cruiser, happy and free. We visited the Kgalagadi, ran races along airstrips in the Kalahari Desert and camped with elephants in the Okavango Swamps. We fished for tiger fish in Kariba, watched warthogs wrestle and discovered all the nature reserves in Zimbabwe. The deafening silence of the bush always touched my soul and I felt free. We learnt all there was to know and retold our facts with fervour. Then every year, as schools closed and summer was upon us, we would cram too much stuff into the station wagon and head all the way down to spend a month in a little nature reserve by the sea. Freedom was personified in its forests and sandy edges.
I made the decision to travel alone. Something I had been afraid to do for so long. I was not good alone, but I had no choice. I wanted to go to a place and sink my teeth into its culture, explore its inner secrets and discover its spirit. I wanted to learn about animals I had yet to meet, I wanted to volunteer, I wanted to give back. I found Travellers Worldwide and their whale and dolphin program in Mauritius. Before I knew it, I was sitting in a window seat listening to the landing gear fold under the plane as tears of happiness glistened in my eyes.
I arrived in Mauritius like a wide eyed kid at an amusement park. I asked my poor taxi driver so many questions I think he was happy to off load me in the town called La Preneuse, on the west coast of Mauritius. I was led to a funny little room in funny little house only two hundred metres from the turquoise sea. A year ago I would have been horrified at this house which was to be my home for five weeks, but that day I did not even notice. There was a sense of peace and appreciation that bubbled deep in my veins; this was the feeling I was searching for.
Then as if in a dream I was standing on a speedboat, bracing myself against the spray of the waves as we streamed over them. I dipped my head to tighten my hat and a smile extended to every corner of my face. I was free. I was not sitting behind a desk, I was not stuck in another pointless meeting, and I was not staring at a television set. I was flying across the ocean, the least claustrophobic place on the planet. 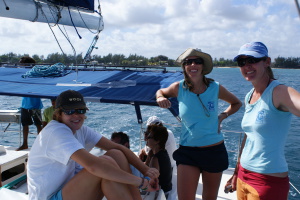 In the face of real fear, as your bravery comes through you free yourself from those restraining uncertainties. As I sat on the edge of the research boat, staring into the infinite depths of the Indian Ocean, I took a deep breath, ignored my trembling body and let go. I had no idea what was waiting for me, and as I squinted through my mask and panted into my snorkel the largest animal I have ever seen appeared in front of me. We were swimming with Sperm Whales, in the deep blue of the Indian Ocean. It was as though I was imagining it. I could feel my heart beating so loudly I was sure the eighteen metre long sperm whale could feel its vibrations through the depths. I suddenly felt more alive than I had in ten years and as I floated, watching this giant mammal drift past, I let go. I let go of fear, of anger and of regret. 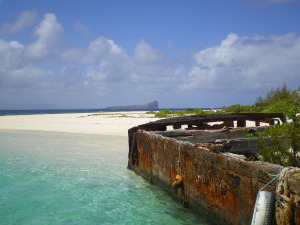 Every day I swam in the sapphire ocean with graceful dolphins, mesmerizing sperm whales and shy turtles. I watched their movements and behaviour and it was here I learnt what it meant to be free. The small stuff I sweated previously became obsolete. Relentless habits and fussiness dissipated.
“You have a beautiful heart.” Bruno said nodding. “I have only met a few people like you in my life.” Bruno, our Creole boat captain, was a family man with a smooth reggae voice. He always sang Bob Marley’s ‘Redemption Song’ while we sat waiting for turtles in Black River Bay, and I would sing along in my head.
“Nobody ever said that to me before Bruno, merci, vous êtes genre” I replied.
“That I cannot believe Colleen. Your love and acceptance of people is without discrimination.”
I felt so overwhelmed by what he said. Was it true? Am I this person of warmth and love? My parents had always told me this and I had wanted to believe them. But, in the early hours of a morning on the way to work, I muttered curses at every person who got in my way, I hated my heart. It was impatient, agitated and frowning. Over the years I had grown a thicker skin, a paler smile and a deeper sigh.
I got back to the volunteer house that afternoon and opened my moleskin notebook. Instead of filling the pages with adjectives for the many blues of the Indian Ocean, I drew a heart, and wrote:
“Where is the love?”
Around my neck hung a little silver heart on a silk thread that my cousin gave me just before her wedding, months earlier. She understood then already what I was searching for. I touched it and I felt full of purpose, the theme of my first book forming in my mind. I sent her a message and told her I missed her. I missed my family, I missed being loved. 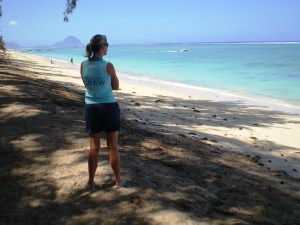 I lived for forty days on this radiant island. I met people who taught me how to smile with my heart so that it shone through my face. I ate, drank, danced and lived the Mauritian way of life. Learning about the fragility of the animals in our seas spoke to my sense of conservation in a loud voice. As we gathered our data on the boat and watched the dolphins, I cringed with every noisy tourist that plunged into the water and swam after the pod. I felt good about being there.

Two nights before I was due to leave the island, I sat alone in a creole restaurant waiting for my first ever crab dish to arrive. My fellow volunteers Dan and Sarah had already gone and I had been exploring the island alone for a few days. Six months ago, the thought of eating alone in a restaurant would have made me shrink with apprehension. Yet here I sat, completely oblivious and immensely content. My mother would be proud. I was proud. I was free. There is a great sense of freedom in being alone. The luxury of having only your thoughts and daydreams to entertain you. I suddenly became excited for the next months that lay ahead of me. I was embarking on a trip to Singapore, Bali and Australia. The remainder of my great soul searching mission. Me against the world, me against the bed bugs of hostels and the towering landscapes of foreign cities. My search for freedom. The reality was that I had found it all while volunteering. I could have stayed there for three months and discovered it over and over again. Instead I left. I said goodbye to my new friend, an island with spirit and soul. A culture that infected me, a program that inspired me and an ocean that freed me. 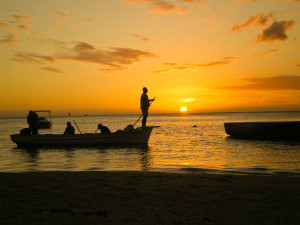 I am a bush loving, ocean living, wine drinking, olive eating travel writer sharing Southern Africa and afar through my stories and photography. I have been published across a variety of platforms from travel articles in magazines and blogs to travel guides and travel books. Follow my blogs and hopefully you can travel with me through my words.

Other blogs I write for...