To quote a cliché but true saying: “Life is not measured by the breaths you take but by the moments which take your breath away.”

Living where I live I am one of the few blessed people that struggles to breathe because so much of my breath is constantly snatched away as I go about my daily activities.  Walks on the beach at spring low tide with glistening aquamarine pools, pausing on the Groot River bridge to hear the forest shout out loud, whales breaching off the horizon or an Osprey catching a fish on a backwash.  Once again this weekend I saw a phenomenon which has not had me so breathless for a long time.

Phosphorescence  is one of those things we can see when we head down to the beach on a dark night and the waves glow white while the sand under our feet sparkles as we jump up and down like children.  This weekend we were graced with the most awe inspiring,  astounding and incandescent phosphorescence displays I have ever seen.  Phosphorescence is defined as heatless light generated chemically by marine plants and animals.  It is also known as bioluminescence which in this case is produced by a blooming phytoplankton.  At night the masses of these creatures each give off tiny flashes as they are disturbed or as the wave breaks causing glowing wakes as far as the eye can see.  We arrived at the lagoon a few nights before new moon so without the lunar light it was dark but as we rounded the edge of the dune at the lagoon our faces, bodies and eyes were lit up with the luminescent green waves. One cannot control your reaction to seeing something as remarkable as this particular phosphorescent display so all you can do shout and exclaim out loud with a lot of whooping and wowing. We rush down to the water and look out towards the eastern end of the beach.  We can see all the way to blue rocks as row after row of green glowing waves roll into the shore and light up our view. The water washes around our legs and I suddenly have glowing specks on my knees, hands and all around my ankles.  I want to grab the water and throw it in the air showering myself in this inconceivable sparkly water.  The breakers out in the back line keep exploding with bright flashes of neon green lights and I look over my shoulder and in the sky to try and see if perhaps the source of this incredible light is a laser show or some special effect designed to confuse us.  But no it is all real and natural and possibly one the best performances nature has given me yet in my life.  We walk around in the lagoon mouth and it feels as though I have lights coming out the end of my toes and out my ankles as the water rushes around my feet shining and luminous.  As you drag your feet on the wet sand you create glittering lines which remain for a few seconds.  Running across the sand I leave psychedelic footprints and we laugh like excited children in a free candy store. Breathtaking.

The reason for this brighter than normal phosphorescence is a large mass of brown/red tide which moved into the bay on Friday.  In daylight you can make out the patches of murky brown water across the bay which was the result of an algal bloom out at sea a few days/weeks ago. Cheerless by day and spectacular by night. We returned on Sunday evening for more this time with camera in hand and a tripod to try and capture it on film to share with all my beloved family, friends and fans that I can’t share it with in person.  The waves come out blue on film but give you an idea nonetheless.

It was honestly one of those experiences which I found myself saying, I might never have the opportunity to see this again so I absorbed some of the glow deep down into my soul to store it for future dark days or nights. 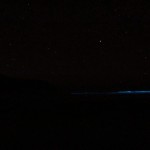 Waves running into the point, you can just make out its silhouette 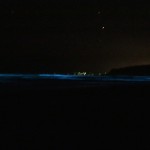 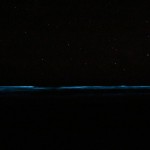 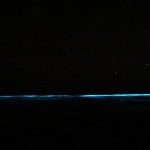 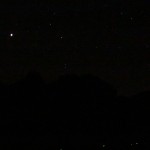 Bright star in the sky. Note the green flashes in the bottom right of the picture of us running through the water 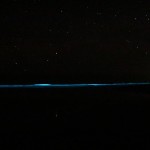